skip to main | skip to sidebar

Many thanks to the six badasses who came out Saturday to replace the rock steps on the approach to Betagraph! Amazing how much work got done! We formed the very upper, steepest part of the trail into a switchback, so please use it and pass the word along! Here are some pics from the day: 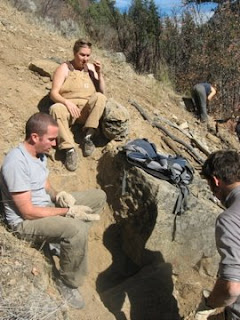 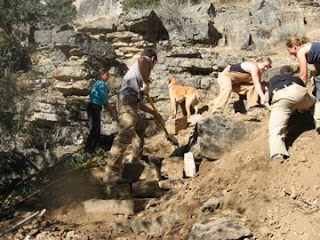 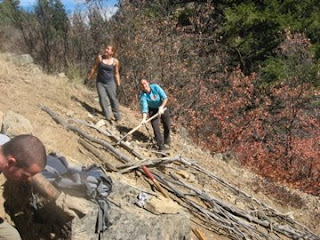 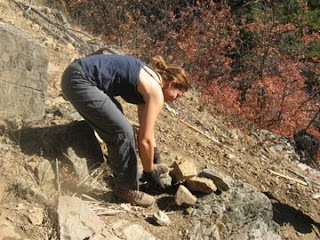 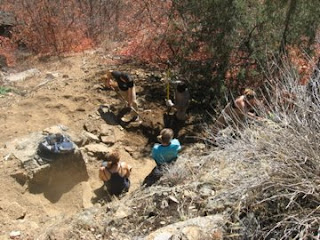 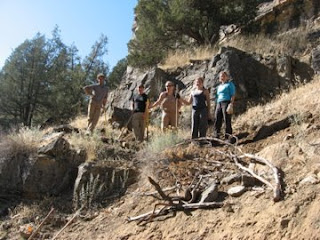 Posted by Northern Utah Climbers' Coalition at 12:13 PM No comments:

Yep, we'll finally be heading out to get this done! Weather forecast calls for 63 and sunny...perfect conditions for getting the upper approach to Betagraph worked into a more stable trail.

As this follows the October 4th Adopt-a-Crag, it will be an unsupported work day. Bring water, food, and anything else that might help get you through the day. With enough people we should be able to knock out the work in half a day or so. Work boots and gloves might be a good idea too if you have them.

See y'all Saturday!
Posted by Northern Utah Climbers' Coalition at 8:52 AM No comments: 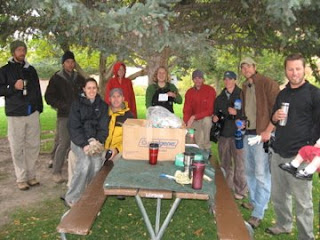 Our first Adopt-a-Crag was held October 4th amid morning temperatures in the mid- to upper-40s, and rain that began as a drizzle and became heavier and more consistent as the day progressed. Fourteen people came out to help, and were greeted by a very much appreciated 3 jugs of coffee from Cafe Ibis. Chris and Susan's bag-o-cookies hit the spot, too.

As the weather prohibited intended trail work at
Betagraph, focus was placed on collecting garbage from climbing areas, campsites, and from along the roadside throughout Logan Canyon. Three groups worked for about four hours in extremely wet conditions, collecting 40ish(?) bags of trash and two tires.

Due to the wet weather, a number of coalition members have made plans to finish the trail work component of our project on evenings or weekends as weather permits.
Posted by Northern Utah Climbers' Coalition at 8:38 AM No comments:

A big thank you to all who participated in NUCC's first organizational meeting. The meeting was held April 17 at 8:00pm at Rockhaus...many thanks to Trevor for offering us space in his lobby.

Topics discussed focused primarily on the direction that founding members would like to see NUCC follow (it was also determined that the acronym for the coalition should be pronounced "nuke," which came complete with all expected, "let's nuke this and that" comments). Needed projects in and around Logan Canyon include:

It was further agreed that our interests would be best served by becoming an Access Fund affiliate organization, and with the much-appreciated help of Charlie Boas and Diana Vernazza at the AF, the paperwork has been submitted and we are official! Many thanks to Charlie and Diana, and to the AF, for their support. We encourage all climbers in NUCC to become members of the Access Fund as well.

Also currently underway is the establishment of long-term monitoring to be done in the canyon to survey the threatened Primula (McGuire's Primrose) plant species. Led by Sylvia Denise Torti, and in tandem with the Forest Service, Utah State researchers, and local climbers, monitoring sites will be established to investigate potential climatic and human impacts on the presence of the flower in Logan Canyon. This will be an ongoing research study, and serves as a critical example of how local climbing interests can be better served by the presence of NUCC. A recent article in the Logan Herald Journal highlighted this research:

Again, thanks to the climbers who attended the first meeting. More information on upcoming projects will soon be made available, so please bookmark our website!
Posted by Northern Utah Climbers' Coalition at 11:58 AM No comments: